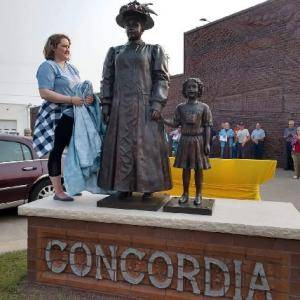 The 17th Annual Celebration of Orphan Train Riders was held May 30th through June 1st in Concordia. The highlight of the weekend was the unveiling of two new Orphan Train Rider Statues outside the Whole Wall Mural, the longest sculpted brick mural in the United States located on the east wall of the Cloud County Museum Annex and Concordia Travel Information Center/Cloud County Tourism Office.

The new statues are a life-sized bronze replica statue of placement agent Anna Laura Hill of the Children’s Aid Society, as well as an Orphan Train Rider statue of Anna Louise Doherty, rider to Clifton, Arizona in 1904, which was installed in memory of the late-Audrey Kalivoda.

As co-director of Cloud County Tourism from 2014 to 2017, Audrey worked tirelessly promoting Cloud County. When the Orphan Train Rider Statue Project was created in 2016, Audrey was all-out gung-ho from the beginning and photographed each of the first statues.

In 2017, Audrey died in a car accident. Her family agreed that memorial donations could be used to sponsor an Oprhan Train Rider Statue in Audrey's memory.

Audrey was a fine photographer, as was Anna Laura Hill. The Imperial brand camera around Anna Louise Doherty's neck is a replica of Audrey's first camera.