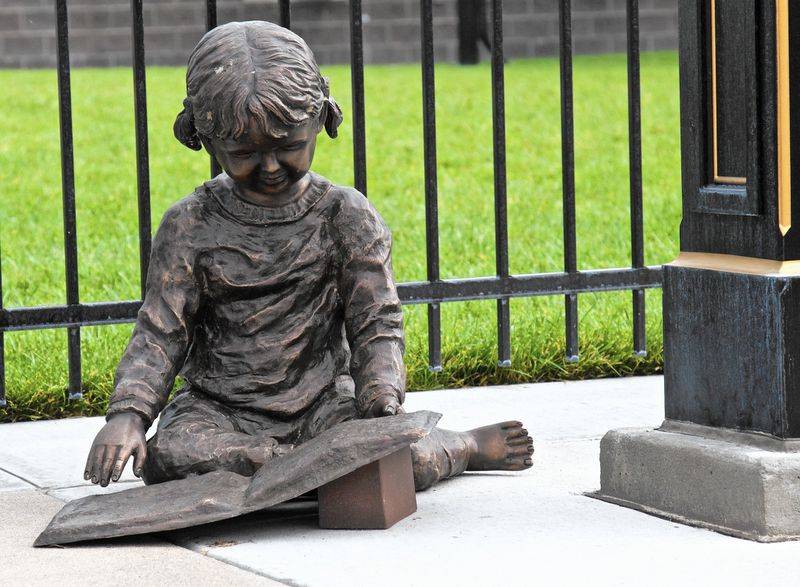 A new bronze statue of a little girl sits on a sidewalk in Concordia, Kan. Her name is Miriam Zitur, and she's a darling little thing, about 6 years old with pigtails and bare feet.

Miriam is among the first of several dozen statues representing real children that are popping up on the streets of this north central Kansas town of fewer than 6,000 residents. The statues celebrate the upcoming 10th anniversary of the National Orphan Train Complex that opened at 300 Washington St. in 2007.

The facility, a former Union Pacific Railroad Depot, is a museum and research center dedicated to the so-called Orphan Train movement, through which an estimated 250,000 children were relocated by rail to homes throughout North America between 1854 and 1929. The museum explores a time when abandoned, orphaned and neglected children, many the offspring of poor immigrants, were left to fend for themselves on the streets of New York.

Miriam was just 19 months old in 1908, an orphan in New York, when she and others like her were gathered up by the Children's Aid Society, placed on trains and sent west — some to loving families, some not so much. The ads in rural newspapers announcing the arrival of an orphan train read "Children: Free to a Good Home." Miriam, who died in 1993, was adopted by a family in Minnesota.

Visitors can step inside the recently added 19th-century passenger car to feel what it was like to ride an orphan train. They also can learn about Anna Laura Hill, a passionate young woman who accompanied the children west and followed up on them in their new homes. (These days, she'd be called a social worker.) A life-size statue of Hill soon will join the children on the streets of Concordia.