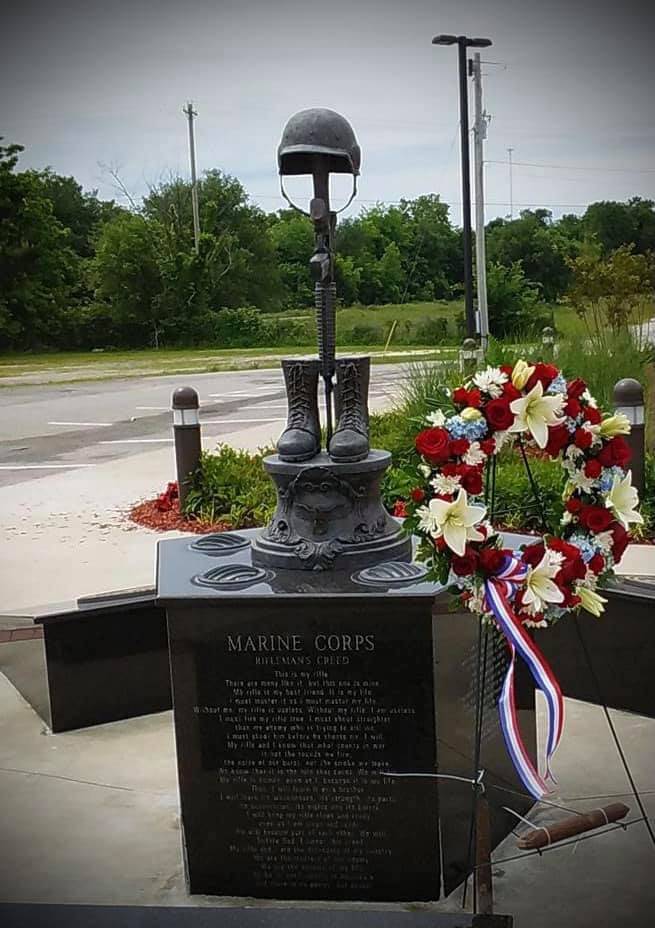 A plate on the sculpture indicates it is part of the Randolph Rose Collection. The Veterans Building which stands adjacent was recently renovated, and as far as we could tell, this memorial was placed here and dedicated on November 11, 2016. 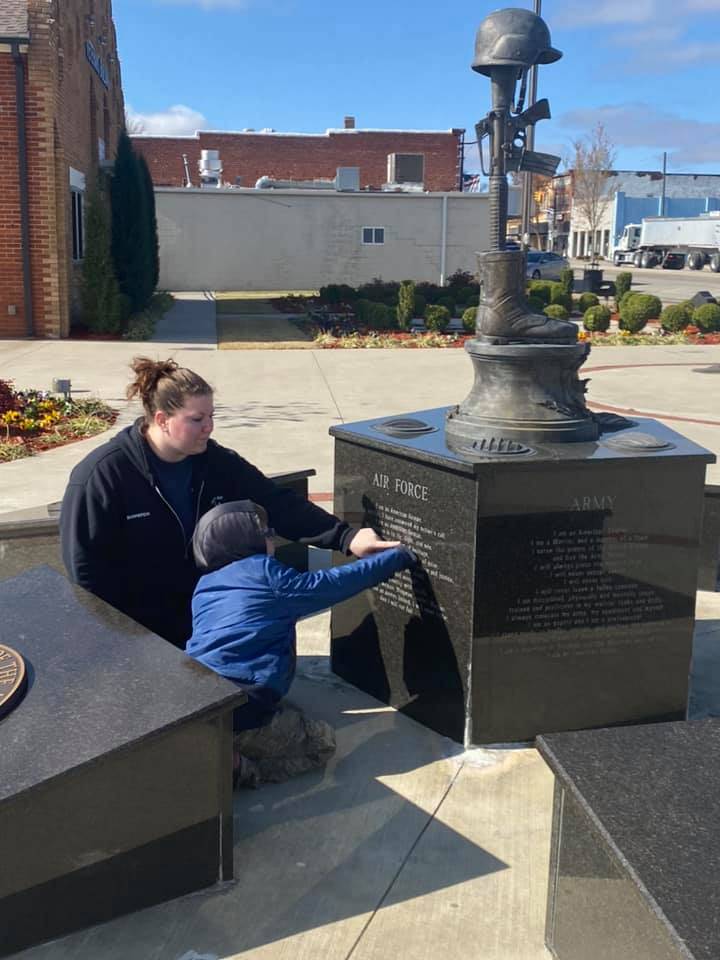 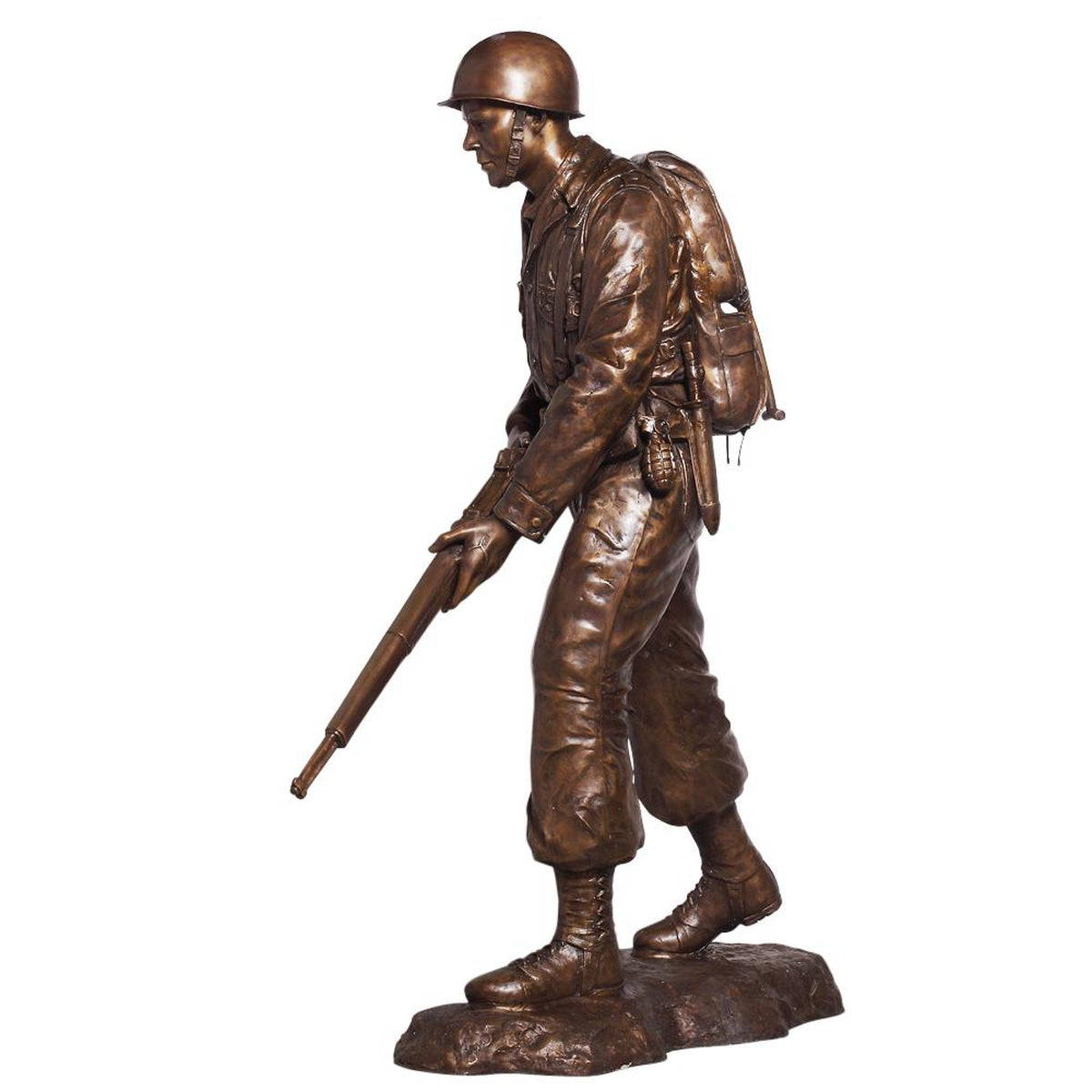 To the east stands this life-sized bronze sculpture of a World War II Marine, in full uniform. He has on a helmet and backpack, and is holding his rifle pointed down.

The sculpture is from the collection of Randolph Rose Collection and was dedicated on November 11, 2016 when renovation of the Veterans Building was honored.

Built in 1946, the former American Legion and VFW post Collinsville, Oklahoma had deteriorated over time. “It’s just been an icon for the city,” City Manager Pam Polk said. “We knew we wanted to bring it back to life to make it not only a remembrance of those that have fought for us and given us our freedoms but to have it for the community’s use for different events.” The 5,000-square-foot facility has undergone a number of upgrades, including installation of a new roof system, restrooms, meeting rooms, flooring and walkways, as well as improvements to landscaping. The foyer, which features a catering kitchen and stage, can be used for community events and is available to rent. Above the front entrance, engraved on a concrete panel are the words: "This building is dedicated to those who served our country - by the community of Collinsville.

In addition to hosting the building’s dedication, the city unveiled a war memorial outside that features bronze sculptures of a World War II Marine and a fallen soldier “battlefield cross.” The creeds of each military branch are etched in black granite plaques surrounding the cross.st at Ninth and Main streets had deteriorated over time. It was deeded to the city of Collinsville shortly before its roof collapsed in 2012. City officials decided to fully restore both the inside and outside of the structure, improving its many features and preserving its long history. The city invested around $700,000 in the project, which came from a surplus in Vision 2025 funds. Some private fundraising for the development was done, as well.

This memorial stands on a concrete circular patio, bordered by inlaid bricks. At the center is a 5-sided black granite base on which stands a Marine Corps Battle Cross memorial. On each of the five faces, a soldier's creed for each branch of service is engraved.

The symbol and history of the Battle Cross: "The Fallen Soldier Battle Cross, Battlefield Cross or Battle Cross is a symbolic replacement of a cross, or marker appropriate to an individual service-member's religion, on the battlefield or at the base camp for a soldier who has been killed. It is made up of the soldier's rifle stuck into the ground or into the soldier's boots, with helmet on top. Dog tags are sometimes placed on the rifle, and the boots of the dead soldier can be placed next to the rifle. The purpose is to show honor and respect for the dead at the battle site. The practice started during or prior to the American Civil War, as a means of identifying the bodies on the battleground before removal. Today, it is a means of showing respect for the dead among the still living members of the troop. It is commonly seen in the field or base camp after a battle, especially among American troops in Afghanistan or Iraq. While it is used less today as a means of identification, it still serves as a method of mourning among the living, as attending the funeral is not always possible for soldiers still in combat."

Circling this centered sculpture are five large sloped granite slabs on which bronze seals of each of the armed forces are shown: Army, Air Force, Marine Corps, Navy and Coast Guard.